Kate Middleton Who? Dua Lipa Spotted in the Duchess of Cambridge’s Signature Style

Dua Lipa is going for a chic, preppy vibe as she channels Kate Middleton.

Interestingly, a different Dua Lipa appeared on social media as the 25-year-old singer surprised her fans with a whole new style.

In her post, the "New Rules" hitmaker stunned her 61.4 million followers with her modern take on the schoolgirl look.

It came after the dark-haired beauty shared a photo of her, wearing a long sleeve burgundy printed dress with keyhole detail at the center alongside a very preppy white peter pan collar.

She then finishes off the look with a pair of black Dr. Martens' high-cut boots to achieve that casual, grungy style.

"Schools out" Dua Lipa's Instagram caption reads alongside a series of snaps featuring her outfit.

Over the comment section, fans and celebrity friends complimented her new fashion style.

British singer Grace Carter pointed out her black purse and mentioned "The Bag," followed by a smiley emoji.

Meanwhile, singer-songwriter Sarah Hudson gave the award-winning singer gave a nod to her outfit by saying, "Ugh, this lewk." 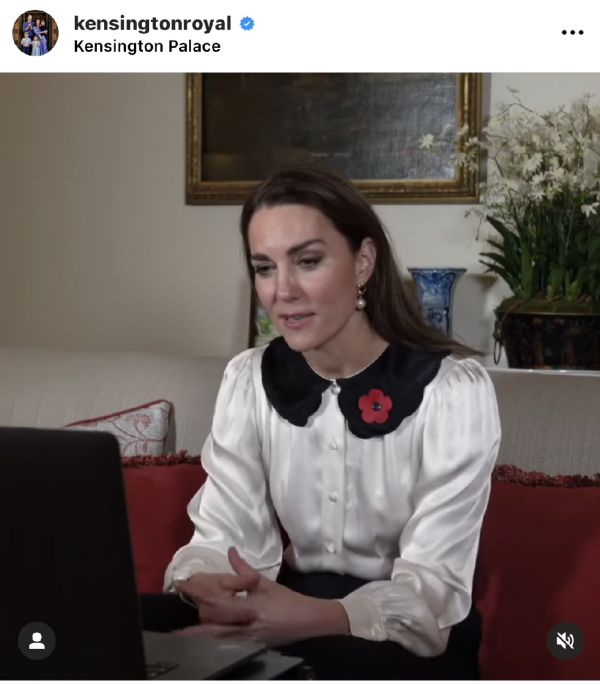 Although the Duchess of Cambridge would not be caught alive wearing chunky black boots, the royal mom was often photographed donning her signature style--which is the peter pan collar.

It is a flat collar with big rounded ends and soft, curved corners that is often a style staple for preppy looks.

Said to be one of the biggest fashion trends, the mother-of-three recently wore this during her virtual call with the British Armed Forces.

In a post shared by the Duke and Duchess of Cambridge's Official Instagram account, Kate Middleton appeared in a satin ivy button-down top and slightly puffy sleeves detail as she paired it with a Peter Pan collar by Ghost London.

For a Zoom meeting-ready look, the 39-year-old royal paired it with a pair of black cigarette pants and opted for classic jewelry, like her pearl drop earrings.

A tribute to Diana? Kate chose similar designs as Diana did when introducing the world to her first and second sons. pic.twitter.com/qItPufwghy

Aside from this, the blonde beauty was also spotted wearing this trend during her first public appearance after giving birth with baby number three.

The lovely couple struck a pose at the stairs of Lindo Wing of St. Mary's Hospital in London.

At the time, Prince William's wife opted for a red dress with a white lace collar designed by Jenny Packham.

According to Town and Country, this is the third time that the duchess has worn a custom-made dress made by the British fashion designer for her post-birth debut.

Interestingly, it appears that Kate Middleton's post-pregnancy look is a homage to the late Princess Diana.

To recall, the Princess of Wales also wore an almost similar outfit when she introduced her youngest son, Prince Harry, in 1984.

The People's Princess was photographed sporting a bright red three-quarter-sleeve dress and a white peter-pan collar.

READ MORE: Get Kate Middleton's Nose Without Going under the Knife