The glitz and glam of Hollywood are back during the Golden Globes 2021.

For the fourth time, the comedic duo Tina Fey and Amy Poehler hosted the prestigious award-giving body as the biggest and brightest stars virtually gathered to celebrate the 78th Golden Globe Awards.

Despite the socially distanced event, things have been close to reality through the ceremony's zoom awards and virtual red carpet.

With that being said, we rundown the fashion moments for Golden Globes 2021 best and worst dressed.

We can all agree that the "Queen's Gambit" star slayed the virtual red carpet with her custom Dior Couture dress.

She then finishes off her glam look with platinum pin-straight hair and stunning accessories from Tiffany & Co. jewelry that reportedly retails for more than one million, as cited by Vogue.

Over her Instagram, she thanked her dream team for coming up with her jaw-dropping award ceremony look.

"Thank you thank you THANK YOU for my dress of dreams to the wonderful team at @dior , @diormakeup and my fairy godfather @luxurylaw . Green for Beth, green for Emma , green for me,," she wrote.

You would not miss Cynthia Erivo's eye-catching neon dress from Valentino Couture. Unfortunately, her look was not one of our favorite ensembles of the night as the "Harriet" star sports an ultra-vivid neon green mesh dress that features a sculptural ball gown shape. She then paired it with a metallic platform wedge and ivory-colored -elbow-length leather gloves. Her stylist Jason Bolden previously shared to E! 's pre-show broadcast that the actress was clueless about her Golden Globes dress. "Cynthia knew nothing about this dress, but she trusts me and allows me to be creative," he mentioned, as obtained by People.

Although Kelley Cuoco failed to win her first Golden Globe award for Best Actress in a Musical or Comedy TV Series, "The Flight Attendant" star won the hearts of many with her captivating Oscar de la Renta dress. The blonde beauty dazzled in a gray princess-like ball gown with embellished details.

Fans were surprised as Margot Robbie appeared in a more casual and relaxed look. The Oscar-nominated Actress wore a printed black spaghetti-strapped Chanel dress with off-the-shoulder details and a ruffled neckline. The actress' Golden Globe dress also features a thigh-high slit as she capped off her look with strappy black heels, a Chanel logo belt, and a matchy bag.

For the male category, Josh O'Connor looked a total dapper in his Loewe suit.

He then paired it with white loose-fitting trousers and a silky white cravat. 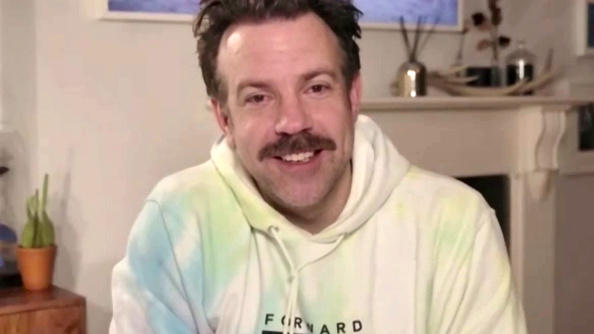 Wrapping up the worst Golden Globes 2021 outfit is none other than Jason Sudeikis.

The 45-year-old comedian, who was nominated as Best Actor - Television Series Musical or Comedy for his series, "Ted Lasso," appeared on a virtual red carpet wearing a rainbow tie-dye hoodie.

This instantly became a massive hit on the internet as fans mocked him for his pandemic vibe look.