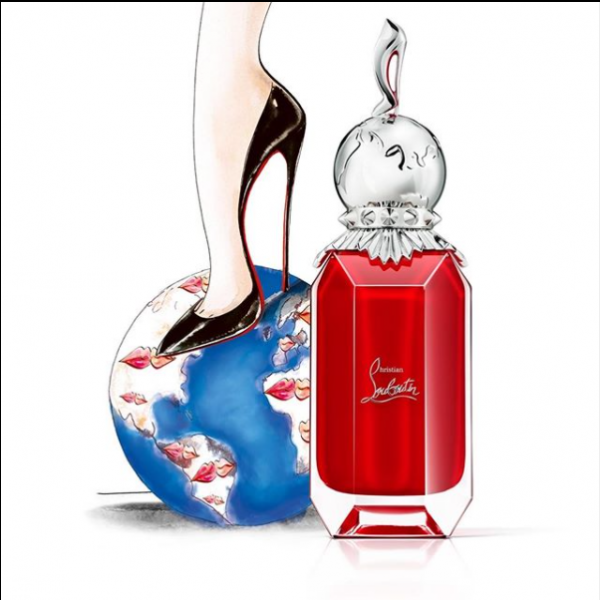 Famous for his scarlet-soled luxury footwear, designer Christian Louboutin ventures into the world of perfumery and launches his first fragrance collection he has named Loubiworld. Born in France in 1963, Louboutin was expelled from school at age 16 and started working at the famed Parisian cabaret Folies Bergères. By the 1980s, he landed a job with well-known shoe designer Charles Jourdan. His famous red soles made their debut in 1993 and he has since expanded his business into bridal wear, bags, accessories, makeup and now, perfume.

In an interview with Allure Magazine, Louboutin shares that releasing a fragrance line has been on his to-do list for a long time and it took a couple of years to create not one, but seven, signature scents. Each scent has a distinct theme and an ornately designed bottle that was inspired by different cultures, experiences, and personalities. Each 90 ml bottle is also in Louboutin's signature color red. As he tells Allure, "The most important thing for me was to take the time to make Loubiworld a really complete collection [and] reflect on the fragrances themselves, the design of the bottle, and caps."

With his signature red-soled high heel on the bottle cap, this perfume is inspired by Louboutin's hometown, Paris, and has a spicy oriental scent with notes of cardamom, iris, and vanilla.

As the name suggests, a crocodile is wrapped around the bottle cap. Described on Louboutin's website as, "the guardian of the secrets of the pyramids," it's probably safe to assume this is inspired by the land of Egypt and has olfactory notes of myrrh, cypriol and sandalwood.

An icon of the Mexican celebration Día de los Muertos or Day of the Dead, a calavera skull topped with white roses can be found on this perfume's bottle cap. This one is described as floral and woody with notes of jasmine, tuberose, and musk.

The lucky cat on the bottle cap is said to bring good luck and great fortune. With notes of strawberries, rose bouquet and cedar wood, this scent is on the floral and fruity side.

Topped with a red-studded crown, this perfume is fit for royalty. This is a woody oriental scent with patchouli, cedar wood and tonka bean notes.

With what looks to be a turban-wearing tiger on the bottle cab, this scent is labeled leather woody with a full-bodied blend of suede leather, pink pepper, and cedar wood.

Crowning a pineapple are Louboutin's signature red-soled stilettos. This fragrance is a floral rose with hints of blackcurrant, Turkish rose, and patchouli.

Also found on Louboutin's official website is a Loubiworld Fragrance Collection profiler to help visitors find the fragrance that perfectly suits them. At the end of an interactive quiz are several suggestions based on your preferences.

The Christian Louboutin Loubiworld fragrances retails for $300 each are available now at christianlouboutin.com.

The Benefits of Facial Steaming And How To Do It

|BEAUTY|
The Top Clean Skincare Products That Took Over in 2020

|BEAUTY|
Christmas Shopping 2020: Gifts That Guys Will Actually Want To Use