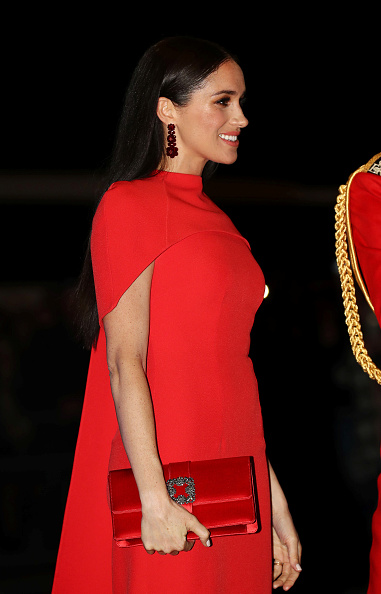 Aside from her dainty designs, another eye-catching piece in the long-awaited collection is the red sparkly embellished chandelier earrings, similar to Meghan Markle.

To recall, the Duchess of Sussex wore Simone Rocha's floral earrings during one of their final royal engagements, alongside Prince Harry, before officially stepping down as senior members of the firm.

At the time, the former "Suits" star appeared in a head-to-toe red ensemble as she sported a pair of $475 dangling crystal earrings that featured burgundy faceted beads during their public appearance at the Mountbatten Festival of Music at Royal Albert Hall in London.

She then paired it with a stunning Safiyaa maxi gown with a short-sleeved cape that cascaded at the back.

Get Meghan Markle's Dupe Earrings for $50

Interestingly, you can get Meghan Markle's earrings at a low price.

However, unlike the "Suits" alum's ornate jewels, the Meghan Markle-inspired earrings are handcrafted with metal decorated details with glass stones and flower-shaped.

In addition, it also has the Irish fashion designer's logo engraved on the back.

Aside from the Duchess of Sussex, another royal who is a fan of Simone Rocha's work is none other than Kate Middleton.

In 2017, the 39-year-old royal mom, alongside Prince William, attended a Garden Party in Berlin, Germany, wearing an eye-catching pair of red earrings by the renowned fashion designer.

It features simple drop earrings made from glass beads and stunning flower beads.

Moreover, the said accessory was reportedly made in Italy.

Just like the former Hollywood actress, the Duchess of Cambridge also dons in an all-red ensemble, but this time, the blonde beauty sported a spring-ready outfit.

She wore an off-the-shoulder dress made by the late British fashion designer Alexander McQueen and paired it with a pair of nude Prada scalloped sandals.

This is not the first time that Kate Middleton was spotted in Simone Rocha earrings.

In 2020, Duke and Duchess of Cambridge left London as the couple boarded the Royal Train, going to their first stop--Manchester's FareShare.

The mother-of-three was spotted in an Amaia Kids floral mask as she accessorized her look with faux-pearl curb-chain earrings from the Irish designer.

In a press release, H&M revealed that the much-awaited collection was inspired by the "emotions that have defined the Simone Rocha world."

It highlights her decade-long contribution to the fashion industry that showcases a homage to her hometowns--Ireland and Hong Kong.